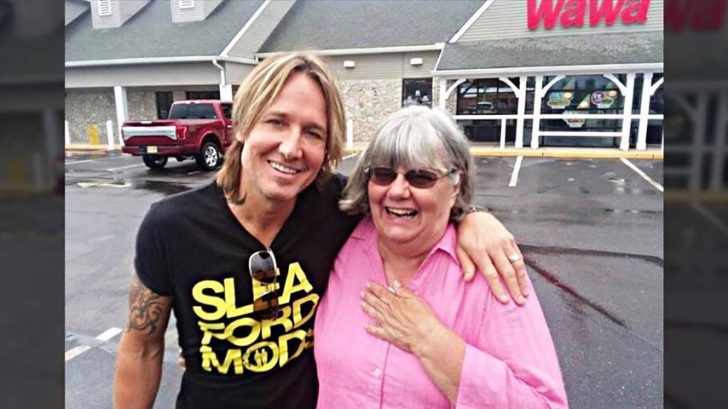 A single act of kindness made news around the world.

Whatever the reason, millions of readers and viewers elevated the retired teacher who made it a habit to “pay it forward” at a local convenience store on a weekly basis.

One day, Keith Urban was at the register purchasing some pre-performance snacks in New Jersey and he came up short on cash. When turned to his sister for a loan, a kind-hearted stranger jumped in and offered to pay.

More Than 15 Minutes Of Fame

Stranger Ruth Reed’s generosity resulted in her photo being shared internationally. After Reed payed for the man’s snacks, he thanked her and asked her what her named was. She told him and asked what his was.

He said, “Keith,” with an Australian accent, clearly giving away his identity.

She didn’t believe him and asked where his wife Nicole was, but he suggested she confirm his identity with his bodyguard outside. They took a photo together, and their story went completely viral!

My favorite story of the day is how my 3rd grade teacher thought @KeithUrban was down on his luck and couldn’t pay for his wawa snacks so she bought them for him. What an angel. pic.twitter.com/mJccVOQWtp

She was even interviewed about it on the talk show Pickler & Ben!

A Song Is Born

Carly Tefft, a Nashville-based singer-songwriter who recently has a single titled “Better Off At A Bar,” was so inspired by the generosity and kindness of the good-hearted teacher that she penned a quick song. The tune was aptly titled “His Name Was Keith.”

As chance would have it, this multi-talented songstress says she was inspired by Urban to move to Nashville and pursue her musical passion.

Keith Urban inspired me to move to Nashville & pursue a career as a singer/songwriter. Ms. Ruth Reed inspires me to spread kindness every day, always. Grateful to be a small part in this story. @TyKellyandChuck https://t.co/VRVA35bjpg

The impromptu song that resulted from this chain of events has become a social media favorite.

Wouldn’t it be great to celebrate random acts of kindness on a daily basis?

What do you think? Take a few minutes and listen to Carly’s take on what transpired. You’ll be glad you did.

ICYMI – So Keith Urban walks into a gas station with no cash and a random stranger pays for him (true story)… ? Carly Tefft #10MinuteTune