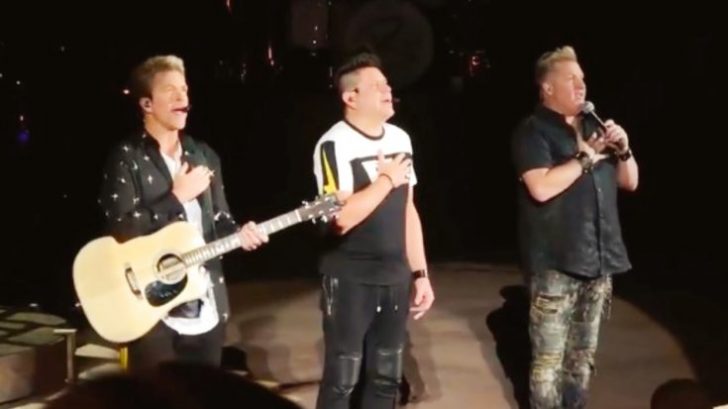 On September 11, 2018, country artists flooded social media with images and messages in remembrance of the lives lost on that same day years prior. Rascal Flatts even went so far as to bring their entire show to a halt for a musical tribute to the victims.

Early in the day, you could tell that the weight of 9/11 was weighing heavy on the members of Rascal Flatts. Jay DeMarcus shared a photo of the twin towers up in smoke, and accompanied that emotional image with an equally emotional message.

“Do you remember where you were, 17 years ago today? I certainly do-and I never want to forget,” he wrote.

DeMarcus then went on to express his thankfulness to the men and women serving in the armed forces to protect the U.S. from such acts:

“Our freedom comes with a price, and there are brave service men and women who stand on the frontlines every single day ready and willing to pay it,” he wrote. “Thank God for them, one and all.“

Later on, as Rascal Flatts arrived for their first-ever performance at the Red Rocks Amphitheatre in Colorado, they came across a powerful sign of remembrance.

Two fire trucks had parked side by side in the parking lot, their ladders raised all the way up into the sky. Between the two ladders, the firefighters had hung a giant American flag, which blew freely in the breeze.

Later that evening, Rascal Flatts brought their entire show to a halt for a spontaneous performance of the National Anthem in honor of those who lost their lives on 9/11.

Their decision to sing the Anthem was seemingly unplanned, giving the performance a heartfelt and sincere feeling. The rawness of it made it more emotional than any planned performance could have been.

It’s hard to watch that without tearing up, isn’t it?

Earlier in 2018, the group was invited to sing the National Anthem to kick off the Nashville Predators’ playoffs run. It was yet another powerful performance from the trio, which you’re sure to enjoy in the video below.