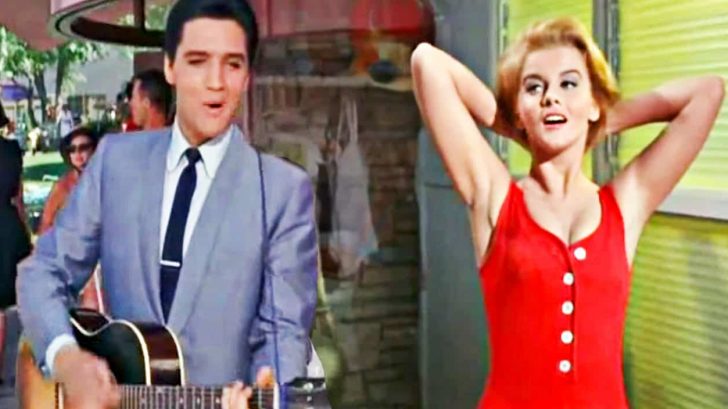 One of the most under-rated clips from The King’s movies with blonde bombshell Ann-Margret is the sassy scene from Viva Las Vegas where he flirts his way right into the hotel pool!

Taking on the starring roles in this 1964 blockbuster film, Elvis Presley and his sultry Swedish counterpart, Ann-Margret, pull out all the stops for this chemistry-filled and sassy duet of “The Lady Loves Me”.

In this scene, Lucky Jackson (Elvis) has come to Las Vegas for a Grand Prix Race but needed to raise money to fix his car. He was able to earn enough cash to fix the car, but after chasing down the enchantingly-beautiful swimming instructor, he loses it when she shoves him into the pool.

Trying to woo her with a bit of guitar playing and his silky-smooth vocals, Elvis chases Ann-Margret around the pool as they exchange flirty barbs and show off their incredible chemistry singing opposite one another. By the end of the scene, Ann-Margret pushes him into the pool with one final line, “And the gentleman’s all wet!”

Watch this unforgettable piece of Elvis’ movie history with Ann-Margret in the video below and let us know what you think in the comments!