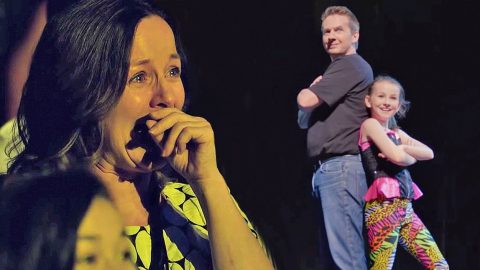 When Lauren and her dad, Michael were each asked “What is something you’ve always wanted to do?” They had the same, heartwarming answer. They both said they wanted to spend more time together.

Lauren is 10-years-old and has two older brothers. Being the baby of the family and the only girl, she has a special bond with her dad.

In a private interview, Michael expressed his feelings towards Lauren:

“Lauren is just 10 now, but it feels like she is going to be 16 tomorrow. I think having a little girl is going to turn out to be more different as time goes on. And I hope that she continues to love her dad and not be embarrassed by her parents. and i hope that she doesn’t think I work too much or don’t pay enough attention to her, because I really do value the time we spend together. “

Lauren has been dancing since she was four-years-old and her parents have been going to see her dance in recitals ever since. The interviewer told the father-daughter duo that, “The sky is the limit. You can do anything together. What would you do?”

Lauren didn’t have to think long about her decision. She wanted to perform a dance number with her dad and surprise her mom! Michael was game, and he rehearsed with Lauren and a dance teacher for a few weeks before the big recital.

Michael’s wife, Lynne, arrived at the recital and Michael was nowhere to be found. Lauren stepped out onstage and announced she was doing a very special dance that she had wanted to do for along time. She dedicated the dance to her parents. Since she thought Michael wasn’t there, Lynne looked disappointed at the empty seat next to her.

Halfway through the dance, Michael runs out on stage and the crowd cheers! Lynne’s reaction is priceless as she has tears of happiness and laughs at her husband’s dance moves!

You can see how much Lauren and Michael love each other and how much fun they are having! This video definitely pulled on our heartstrings, and made us want to hug and spend more time with our loved ones!

Watch the heartwarming video below!