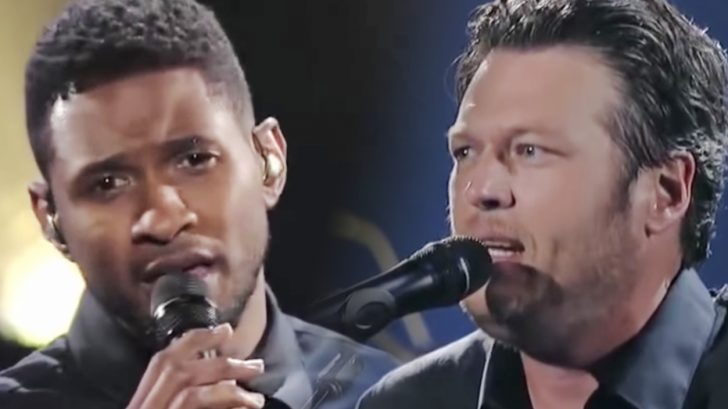 Bringing two superstars together that are successful in different genres always makes for a thrilling performance, and this duet by Blake Shelton and Usher is no different. The stunning performance was all for a good cause, too.

Blake hosted the ‘Healing in the Heartland’ concert, which aired on national television and raised more than $6 million for victims of the tornado in Moore, Oklahoma that hit on May 20th, 2013.

May 29, 2013 – Blake organized and hosted Healing in the Heartland". The event raised over $6 million dollars for the victims of a May 20 tornado in Moore, OK. pic.twitter.com/2GA0EHRZJD

Shelton’s fellow coach from The Voice, R&B superstar Usher, wanted to do his part to contribute, so he performed alongside his co-star for a performance we will never forget.

They might seem like an unlikely pair for a duet, but they took everyone’s breath away with their emotional performance of Michael Bublé’s hit song, “Home.” It truly hit home for everyone involved.

The song was written by Bublé and co-writers, Alan Chang and Amy Foster-Gillies. It was released in March 2005 and was the second single from his album It’s Time. Hitting number one on the Billboard Adult Contemporary chart, it was a massive success!

Shelton loved the song so much he released an amazing cover version in February 2008. It was featured on the re-issue of his 2007 album, Pure BS.

Shelton started off the song, playing guitar and singing the first couple verses solo before Usher made his grand entrance for the chorus. He took a seat next to Shelton, where they finished out the rest of the song in harmony.

Watch the beautiful duet in the video below! You’ll be glad you did.