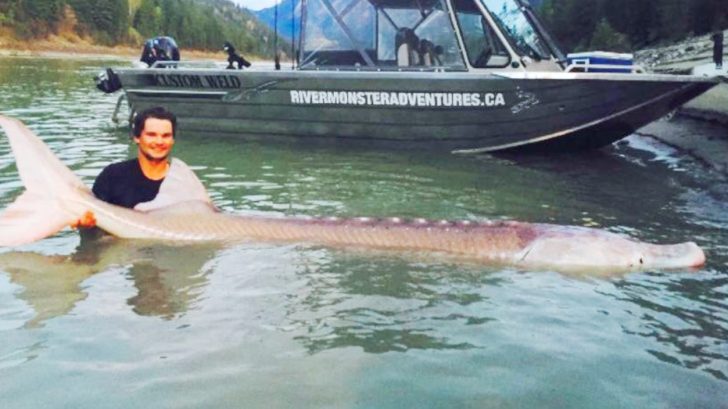 A Fish Fit For A Legend Meets Lucky Teen

All fishermen dream of the day they’ll finally reel in “the big one.” Some spend their whole lives in search of a massive catch, but whether or not they succeed is often up to pure luck.

One young fisherman had a whole lot of luck on his side, as at the young age of 19 he caught a fish so large, it made his boat look small!

Nick McCabe works as a fishing guide on the Fraser River in British Columbia, where legends long circulated about a massive fish with a distinctive pink nose and a body that was ten feet long. Four decades had passed since the rumors first started, and it had been ages since anyone was able to catch the elusive monster fish, leaving many to wonder if it ever existed at all.

So when McCabe finally caught the giant fish while out on an excursion in 2016, he was hailed as a local hero.

Do you believe in monsters ? We sure do ! Our guide Nick McCabe and guests brought this monster in last night 10' 1" 60" girth !!

This Fish’s Stats Are Insane

McCabe recalled the experience while speaking to CBC News, saying that he spotted a white sturgeon that looked just as large as all of the legends had him cracked up to be. “The fish jumped right out of the river and I said, ‘Well, that looks like a 10-footer, so strap on, we’re going to be into at least a two-hour fight,'” he said.

He was right on the money, as it took two hours and 15 minutes to get the monster fish reeled in. Sure enough, it was the legendary creature that McCabe and the other locals had heard so much about. He took its measurements, proving that it was over 10 feet in length, had a 60 inch girth, and weighed 650 lbs.

To put that in perspective, baby elephants typically weigh around 200 lbs at birth.

That monster fish is the equivalent of three baby elephants!

McCabe chose to give the fish the nickname “Pig Nose,” after its abnormally large pink nose that had long been described as part of its legend. It is believed that the fish’s signature pink nose was the result of some sort of injury that happened years ago.

It makes sense why the rumors about Pig Nose circulated for so long. Sturgeons like it are known to live for decades, with the average life span being 50-60 years, though many can and have lived much longer.

McCabe has estimated that Pig Nose is over 80 years old, and that the fish has been swimming around with its signature pink nose for half of its life.

After stopping to take a few pictures with the legendary creature, McCabe set Pig Nose free. But that wasn’t the last time the two encountered each other. He reeled his old fish friend in again a year later, and that time Pig Nose weighed 700 lbs!

“I had a gut feeling it was him,” he told CBC News in another interview. “Just the time of year and how the fish was acting…but as we got it up to the shore I was like, ‘This guy looks pretty familiar.'”

So far, it seems that Pig Nose has evaded being caught by McCabe or anyone else since then. When asked if he had any plans to search for the legendary fish again in the future, McCabe said he was going to continue to leave their meetings up to chance.

“That’s one of the things I love about this fishery,” he said. “You never know what you’re gonna get.”

He certainly never expected to catch that monster fish once, let alone twice! You can learn more about the legendary Pig Nose fish and the teen who finally reeled him in by tuning in to the video below.