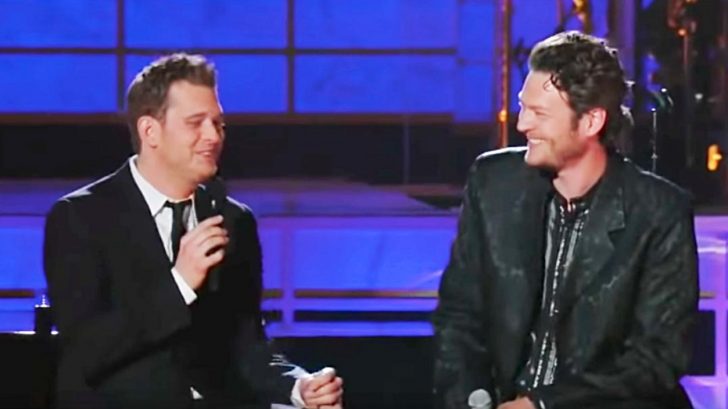 Michael Buble was ready to grace the crowd with his smooth vocals when he randomly asked David Foster, “Is he around?” With the crowd unaware of who “he” was, they were pleasantly surprised when a guest country star walked out on stage. Just as the music started playing – Blake Shelton appeared!

As Shelton gets settled, Buble starts in with his signature song, “Home.” The two share a laugh as Buble jokingly looks at Shelton, cueing him to sing. Shelton then adds his perfectly twangy voice to the crooner’s song – making it something completely different.

The two male powerhouses show off their funny sides as they continue to jokingly “flirt” – dedicating lines like “I miss you, you know” to each other. It was near impossible for Buble to keep a straight face.

The singers settled down and delivered a flawless performance of the song. You could feel the raw emotion coming from both of them. We can only imagine how hard it must be to keep a relationship while constantly traveling for tours and shows – but somehow these two have it perfected!

Michale Buble has been married to the Argentinian model, Luisana Lopilato since 2011. Together, Buble and his wife have two adorable little ones that he often takes on tour with him!

This is how the new tour begins. Off to rehearsals. We’re coming to a city near you !!! #getready #2017 #mbtour

These two musical genius’ definitely understand that home is not a place, but a feeling. And watching them come together from very different genres to express that – is magical.