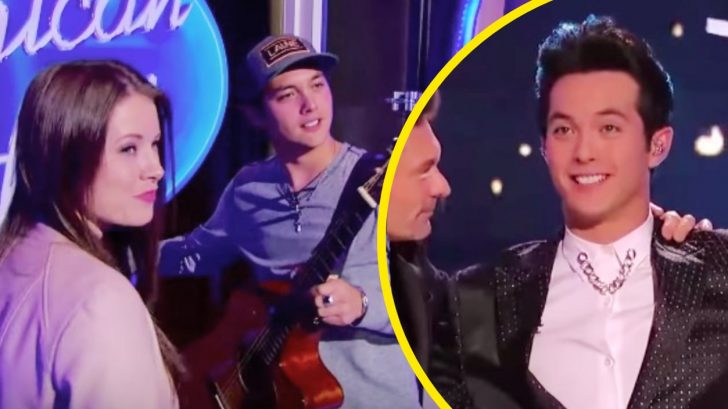 The Road That Led Laine To His Win

On Sunday night (May 19), 18-year-old Laine Hardy was named as the newest winner of American Idol.

Although Hardy won Season 17 of Idol, that wasn’t the only season of the competition series that he ever appeared on. He first auditioned for the show in 2018, and even earned a golden ticket to Hollywood.

But Hardy was eliminated early on in that first season, with the judges telling him he needed to display more confidence while performing.

Hardy went home to Louisiana, recorded a few songs, released some covers on YouTube, and found himself feeling much more confident in his abilities by the time a year had passed. But the young artist had no plans to return to the singing show that previously let him go.

Those plans changed when his friend Ashton Gill asked Hardy if he could play guitar at her audition. Not wanting to let her down, he agreed to do so.

The judges were overjoyed to see Hardy when he walked into the room, and encouraged him to sing as well. He decided to treat them to a little performance, thinking that nothing would come of it.

But before he knew it, he was being offered a golden ticket to Hollywood. He decided to take a chance, and accepted it.

Gill also earned a golden ticket in their audition, so the two friends went to Hollywood together.

How Ashton Feels About Laine’s Success

As you now know, Hardy powered his way through the show to earn the championship title. However, Gill was eliminated during Hollywood week, and was sent home while her friend continued on the show she helped him earn a spot on.

While others may have habored jealous feelings, Gill did not. She was thrilled for Hardy and his success, and rejoiced when he came back for a hometown visit right before the finale.

The two were reunited then, and Gill made it clear how happy she was for her friend.

So when Hardy went on to win the show, devoted Idol fans waited to hear what Gill would have to say about the whole thing. She actually happened to be there to watch him win in person, and got the chance to snap a photo with him once the cameras stopped rolling.

“What a night to say the least! My friend @thelainehardy just WON @americanidol and I could not be more proud and happy for you!” she wrote.

Based on their bright smiles, we’d say that both Gill and Hardy were happy about his big win!

Now it’s time for y’all to relive the now-famous moment that led Hardy to his win by watching his joint audition with Gill below! Neither knew in that moment that one of them would go on to win the whole thing…