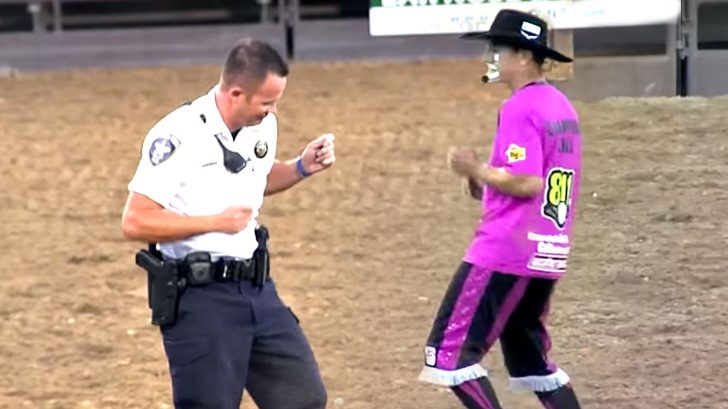 One of the best-known rodeo clowns in the business decided it was time for a little fun with one of the guys on duty during an event in Spanish Fork, Utah – and oh boy, the audience loved it!

His full video below is proof that rodeo clowns have the most fun!

JJ Harrison, a former school teacher turned beloved rodeo clown, is widely known for his quick wit, hysterical antics, and killer dance moves, so it’s no surprise when he does something unexpected and hilarious.

Calling out to an officer in the stands, he tells him to come down into the arena and is later joined by one of the rodeo queens from earlier in the event.

The announcer and JJ go back and forth with some banter about inviting a cop into the arena, to which JJ replies, “I got an idea!”

“We’re gonna have a little dance off – this should be a lot of fun, don’t ya think?” JJ said energetically to the crowd. “How many of you in Spanish Fork wanna see Officer Adams get a little jiggy with it?”

To that, the crowd roared with applause and JJ cued the song to start. When Officer Adams starts throwing down moves, it will blow your mind!

Sheriff Salisbury with Rodeo Clown JJ Harrison at the Ellensburg rodeo yesterday. He wanted to wish everyone a safe LaborDay! pic.twitter.com/vDWlHbfKTl

Take a look at this hysterical video of JJ Harrison, Officer Adams, and a sweet Rodeo Queen doing a dance-off below – you’ll be rolling on the floor with laughter at the end!