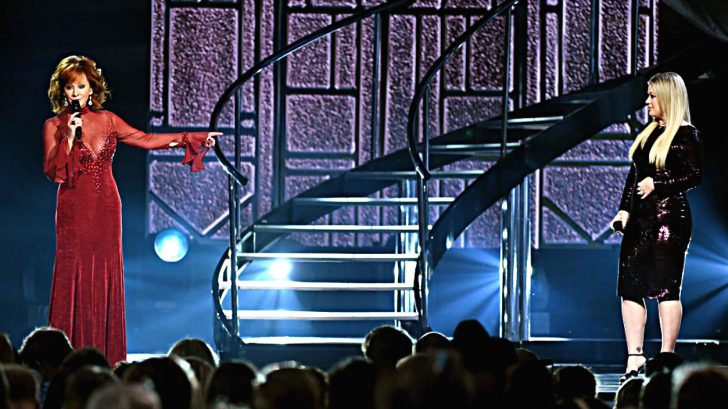 Every awards show, it seems that a few non-country artists are invited to perform, usually as part of a collaboration with another artist. But when it was revealed that Kelly Clarkson would be performing at the 2018 ACM Awards, she wasn’t seen as an outsider, she was seen as family.

Actually, family is the perfect word to use, since Clarkson is kind of connected to a major country music icon. You see, ACM Awards host and country superstar Reba McEntire was once married to Narvel Blackstock, who just so happens to be the father of Clarkson’s husband, Brandon Blackstock.

In addition to all of that, Clarkson grew up singing country music and has a deep love for the genre. She’s even dabbled in it a few times, from singing “Because of You” with McEntire to collaborating with Jason Aldean on their chart-topping hit, “Don’t You Wanna Stay.”

Prior to the ACM Awards, it was announced that certain artists would pair up for “ACM Flashbacks” to celebrate the 25th anniversary of country songs released in 1993. To no surprise, it was revealed that Clarkson would be performing with McEntire.

The two of them sang McEntire’s iconic duet with Linda Davis, “Does He Love You.” Sung from the perspectives of a wife and her husband’s “other woman” the song has both women questioning who their man truly wants to be with.

This doesn’t mark the first time that McEntire and Clarkson have ever performed “Does He Love You.” The two have been singing it together for years, and their rendition has always been a crowd-pleaser. So everyone who tuned in to the ACM Awards knew they were in for a good show.

Get Ready For The Goosebumps…

It doesn’t matter how many times you’ve seen McEntire and Clarkson sing this before, their ACM Awards duet still brings on the goosebumps.

The duet was literally jaw-dropping, and for more reasons beyond McEntire and Clarkson’s stunning vocals. If you can recall, McEntire once caused quite a stir for wearing a sparkly red dress when she sang this very song with Davis years ago.

That particular performance took place at the CMA Awards, but was so famous that McEntire decided to make it part of ACM history as well by wearing the exact same dress again. We’re glad she did, because that made her performance with Clarkson all the more memorable!

Go ahead and check out part of McEntire and Clarkson’s gorgeous duet on “Does He Love You” in the clip below. We don’t know about y’all, but this has us itching for them to do a duets record together!

Reba McEntire and Kelly Clarkson with “Does He Love You”