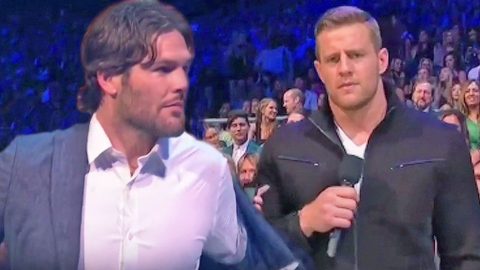 She was up for three awards and performed her hit single “Church Bells.”

Underwood ended up winning two awards at the June 8 show, Female Video of the year and CMT Performance of the Year.

Although she didn’t appear in the star-studded opening skit, she was included in a bit by co-host and Houston Texans defensive end J.J. Watt.

He stood on stage and decided it was a good idea to flirt with the beautiful ladies in the audience, not knowing they were all married to their country-singing husbands.

Watt first flirted with Dierks Bentley’s wife, Cassidy, then with Thomas Rhett’s wife, Lauren. He moved his focus to Carrie Underwood, who he knew was a married woman.

Happy birthday babe! You’re an incredible wife and mom! Us boys are so grateful for you! Love you lots.

He expressed his disappointment that she was not married to a fellow football player.

“Carrie is definitely taken,” he said. “But a hockey player, Care! Come on, now!”

Underwood shrugged it off, but her husband, NHL Star Mike Fisher, did not take this sitting down.  He immediately stood up with a stern look on his face and began taking his suit jacket off! The crowd was in stitches, and so were we!

The camera cut back to Watt who was also taking his jacket off! This was all in good fun for everyone involved and was definitely one of the funniest moments of the whole night!

Watch it in the clip below.