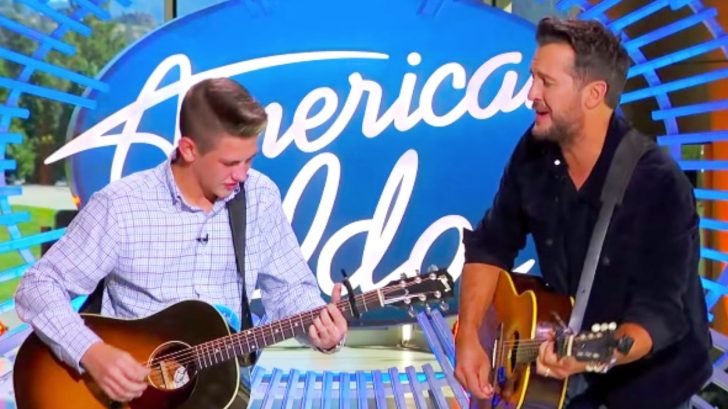 Before every concert, Luke Bryan hosts a meet and greet experience for his most devoted fans. He stops to chat with them for a bit, takes photos, and gives out hugs before going on his way.

But back in 2016, one of Bryan’s meet and greets turned into an extraordinary onstage duet that he is sure to never forget.

Through the Make-A-Wish Foundation, Bryan has been given the chance to meet a number of children and teens whose greatest wish is to interact with their favorite country singer. It was certainly then 13-year-old Ethan Payne’s biggest wish, which is why he was thrilled when the foundation revealed he’d get to meet Bryan backstage at one of his shows.

Payne was only 18 months old when he was diagnosed with cystic fibrosis, a life-threatening disorder that mainly affects the lungs and therefore, breathing. There is no known cure, but Payne says that his personal cure is music.

When he got the chance to meet Bryan, Payne wanted to show him just how much his music means to him. He had a guitar with him and sang Bryan’s hit song “Do I,” and impressed the country superstar with his talent.

That’s when Bryan asked him a question…would he like to sing that same song, with him, in front of 50,000 people that night? Of course Payne said yes!

After the two performed their duet, Bryan gave Payne another great gift. He handed over one of his own guitars, telling the boy to go on and take it home with him.

Reuniting With His Favorite Singer

It was that exact same guitar that a now 15-year-old Payne clutched in his hands when he strolled out to audition for Season 2 of the rebooted version of American Idol, which Bryan now serves as a judge on.

The country singer recognized his former duet partner right away, and his face lit up when he saw him.

After asking Payne how he had been and allowing him to explain his story to the other judges, Lionel Richie and Katy Perry, Bryan was anxious to hear him sing. But rather than perform alone, Payne invited Bryan to stand by his side so the two could make their reunion complete by singing “Do I” together again.

They did just that, and Payne wowed Richie and Perry with his talent and confidence. By the time he finished singing, all three judges were in agreement that he deserved a golden ticket to Hollywood.

See the emotional audition that helped him earn that ticket by tuning in to the video below. It will warm your heart when you see how thrilled Payne and Bryan were to be reunited!