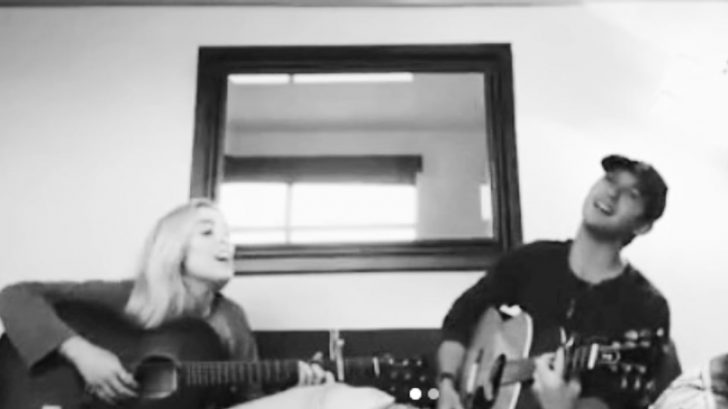 Although they come from two different states, Laine Hardy and Laci Kaye Booth are known as the “country” stars on their season of American Idol. Hardy is a proud Louisiana boy and Booth was born and raised in Texas.

After the two singers were revealed to be part of the Idol Top 8, the show shared some special footage that gave viewers the chance to get to know them a bit better. Those clips proved just how country they are!

Hardy’s showed him fishing and tracking down alligators, while Booth’s followed her intense passion for eating crawfish.

Since Hardy and Booth are as country as can be, it makes sense that they were matched up to sing together during the group rounds of Idol‘s Hollywood week. They were joined by two other artists, forming a group called The Diamond Dixies.

The quartet performed their unique take on Bruno Mars’ “Grenade” for the judges. Three of the four singers moved on after the performance, and Hardy and Booth were two of them.

Until recently, that group performance marked the only time that the two “country” Idols sang together. But due to popular demand, they finally united to perform a duet that y’all never knew you needed.

A Duet Worth Waiting For

Taking to Instagram, Hardy shared that he and Booth wanted to sing The Randy Rogers Band’s “In My Arms Instead” after they got many requests to do so.

Me and @lacikayebooth singing a @randyrogersband song together! (In My Arms Instead) There’s been a bunch of requests for this! Enjoy! ? I will upload it on YouTube!

Once you hear Booth chime in and start harmonizing, you’ll understand why people desperately wanted to hear them sing this together. Their voices melt together like butter, creating a smooth, complete sound that is pleasing to the ear.

Hardy also shared their full performance on his YouTube channel, which you can check out in the video below. If they ever get the chance to sing together on Idol, this is definitely the song they should perform!

After watching this, we have two questions. First of all, why did it take them so long to sing together? And secondly, when are they going to do it again?