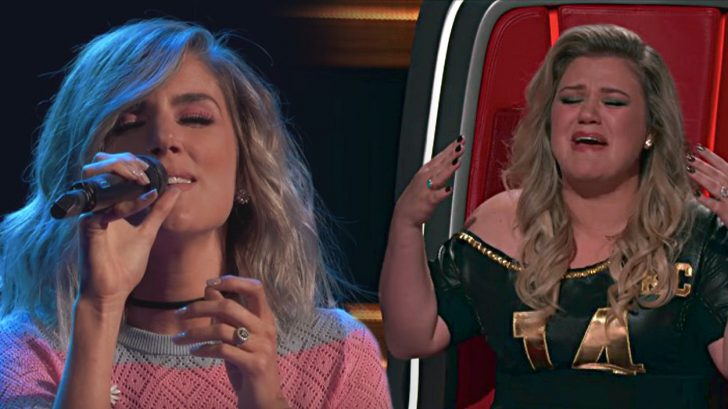 As the first person to ever win American Idol, it only seemed fitting for Kelly Clarkson to perform during what was, at the time, its final season.

In February 2016, Clarkson returned to the same stage that propelled her to fame to perform her new song “Piece by Piece.”

Written by Clarkson and inspired by her real-life story, “Piece by Piece” has Clarkson addressing her father and how he abandoned her as a child. She later goes on to sing about her husband, and how she knows that he will never leave their daughter like her dad left her.

With such a strong connection to the song, it’s an understandably emotional one for Clarkson to perform. She was pregnant with her second child at the time of her Idol performance, which added even more emotion to the situation for her.

As hard as she may have tried, Clarkson was unable to keep the tears from falling as she sang. Her performance was so touching that Idol judge Keith Urban could be seen crying as the camera focused on him.

What Happened When She Heard Someone Sing It

Now that Clarkson is a coach on The Voice, it seemed inevitable that some prospective contestants would try to win a spot on the show by singing her songs.

However, we bet no one was expecting the wave of emotions that hit when one contestant named Stephanie Skipper started in on “Piece by Piece.”

Almost as soon as the song started, Clarkson found herself in tears. She was clearly moved by Skipper’s performance, and the other coaches appeared to be as well.

But despite her emotional response, Clarkson hesitated when it came to turning her chair. She was obviously conflicted, but felt a sense of relief when Adam Levine and then Blake Shelton turned their chairs.

Yet She Still Didn’t Turn Her Chair…

“The fact that you picked that song…it’s cool,” she said choking back tears. “I’m so sorry.“

The two shared a hug and Skipper thanked Clarkson for writing such a powerful song. After that, she was left to chose between Levine and Shelton as her coaches.

Sadly, her time on the show was short, because she lost in the battle rounds that followed. Still, that doesn’t mean you can’t enjoy that performance below!