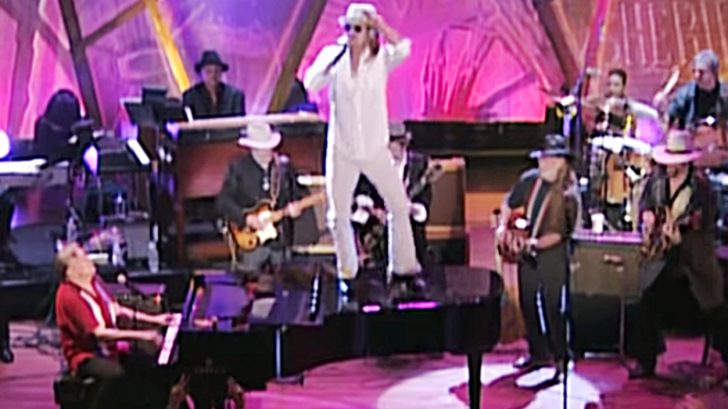 What happens when you put five outlaws-turned-music icons on the same stage? The rowdiest show of the early 2000s. Oh yes, even in his 70s, you can count on Jerry Lee Lewis to steal the show – with a little help from Kid Rock of course. Wondering how these two ended up performing together? You can thank Willie Nelson for that one.

In September of 2004, music legend Willie Nelson stunned fans when he released his album Outlaws & Angels. The album featured a star-studded track list of guest artists including Merle Haggard, Toby Keith, Keith Richards, Lee Ann Womack, and so many more. While the songs were previous hits from incredible artists, it was only fitting when Nelson invited Lewis, Rock, Richards, and Haggard onto one of the most rockin’ tracks, “Whole Lotta Shakin’ Goin’ On.”

That same year the Red-Headed Stranger put on his own televised special with performances from many of the featured stars on the album. One of the most memorable performances of the night went down when Lewis and Rock took the stage together accompanied by Nelson’s sleek guitar skills.

Lewis sat at the piano showing off his well-known piano mastery while Rock joined him on the vocals. Lewis hadn’t lost a single bit of his fiery stage presence as he and Rock kept the crowd screaming the whole time. To finish out the rowdy show, Lewis broke off the cover of the piano keys and threw it before grabbing the microphone stand & slamming it on the keys…talk about a stellar performance!

The hype for “Whole Lotta Shakin’ Goin’ On” all began when Lewis got ahold of it in 1957 and took the world by storm. While producers feared the track would be too risqué, Lewis proved everyone wrong when the song hit No.1 on two Billboard charts. It would go on to be rated as the 61st greatest song of all time by Rolling Stone.

This is one performance you shouldn’t go another day without seeing. Check it out below.