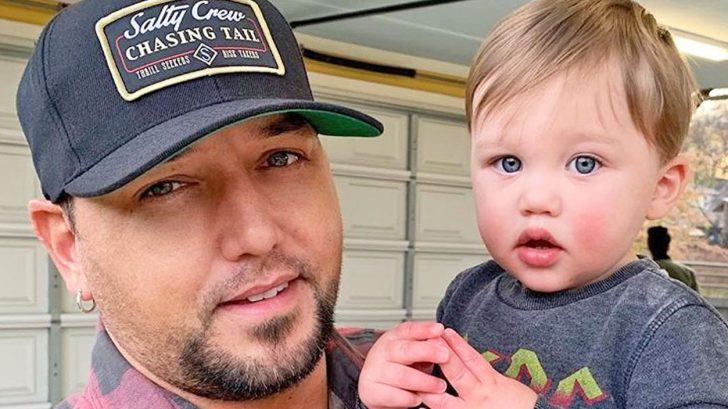 As the Aldean family was getting ready to add another member to the family, baby Memphis was ready to help out. Jason Aldean and his wife, Brittany had their second child together, Navy, on Feb. 4.

While excitement has ensued throughout the Aldean household, Jason caught his mini-me preparing for the big day… just not how he expected.

What are the odds your Birthday is on the same day as the SEC Championship and Bama is playing Georgia🙈 Send mama some good vibes baby!!! ROLL TIDE🏈

Jason and Brittany welcomed sweet Memphis on December 1, 2017. It didn’t take long for him to grow up looking exactly like his daddy. With big eyes and brunette locks, he was a spitting image of Jason, who couldn’t be more proud. Less than a year later, the Nashville couple announced their second pregnancy.

Brittany uploaded a home video showing Jason’s oldest daughters, Kendyl and Keeley hitting baseballs to reveal the gender of baby No. 2. Memphis was about to be a big brother to a baby sister!

When Brittany’s due date was just around the corner, she’s let Memphis get comfortable with the idea of having a sister. It was then that Jason noticed their 13-month-old was playing with a baby doll. To his surprise, he wasn’t a fan of what he saw.

“I’m like, ‘Hold up, time out!’ Seeing my son playing with a baby doll was kind of odd. Like, shouldn’t he have a truck or something?”

Brittany defends that she’s preparing Memphis to play with his new baby sister. While Jason sees the logic, he thinks Memphis will do just fine without any training.

“I think he’s going to do great.” Aldean told PEOPLE.

Being that Memphis is Jason’s only son, it makes sense why he’s being protective. Either way, we think Memphis will make one amazing big brother!