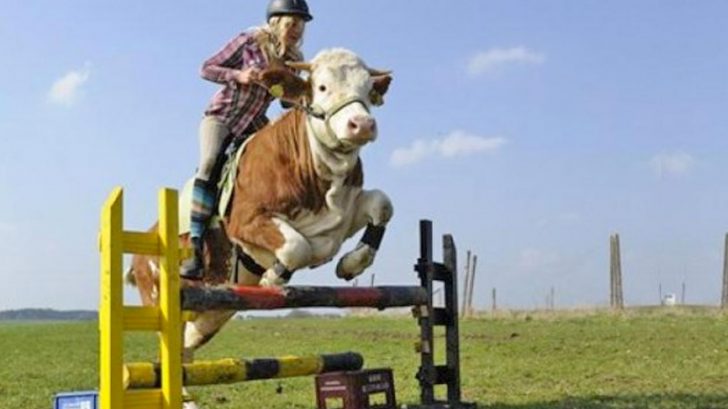 This is no show pony, folks. This is a true jumping cow!

When her parents wouldn’t buy her a horse, Regina Mayer, a 15-year-old farm girl from rural Germany, resolved herself to finding a suitable alternative. Well, as it ended up, she didn’t settle for a donkey, mule, miniature pony, or other livestock of the equine variety – nope! She found exactly what she was looking for in a well-tempered cow.

Luckily, the cow was free as the family already had it on the farm. So, with that, Regina got to work on turning this beefy bovine into a high-kickin’ horse substitute!

Regina Mayer lived on her family's dairy farm in Laufen, Germany. Her parents did not allow her to have a horse. So she trained a cow.2011. pic.twitter.com/AFo8xr9x7s

Starting with walking her new found friend, Luna, in the woods, Mayer slowly trained her to become accustomed to regular human interaction and, even, riding equipment. It wasn’t too long and Regina had not only tamed Luna to be more domesticated than any other cow for miles, but she had also taught her to respond to riding commands.

Just shy of six months later, it was time to see how this barnyard buddy would react to having a rider seated in the saddle.

“She was really well behaved and walked normally,” said Mayer, decked out in riding gear. “But after a couple of meters, she wanted me to get off! You could see that she got a bit peeved.”

Mayer soon developed an extensive routine with Luna including grooming, petting, and riding practice. All-in-all, she spent over two full years training her own version of Seabiscuit to truly jump obstacles and follow commands.

Apparently, the trend caught on and people in other parts of the world were soon jumping their own cows over obstacles!

Watch the video below to catch a glimpse of this unbelievable pair in action!