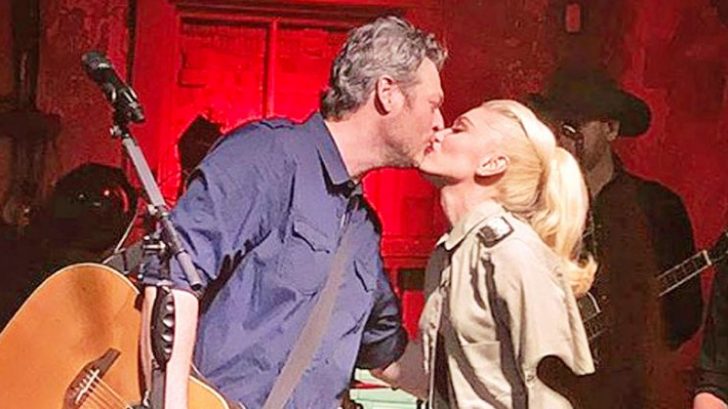 Blake & Gwen: Always By Each Other’s Side

By now, Blake Shelton‘s fans have come to anticipate surprise appearances as his concert…particularly by his girlfriend, Gwen Stefani. If Stefani does happen to attend one of Shelton’s shows, she’ll usually treat the crowd to a performance, though not always.

But when a crowd started chanting Stefani’s name when she attended one of Shelton’s recent shows in Oklahoma, there was no way she could let them down.

Shelton seemed amused by the crowd’s insistence on seeing Stefani perform with him, so he made sure someone got a microphone for her.

Using Humor To Break The Ice

Then, in classic Shelton style, he decided to crack a joke that got a few chuckles out of the crowd. Ever since they started dating, Shelton and Stefani have been the subjects of tabloid gossip. It seems that every other day a new story emerges saying they’re engaged, married, or expecting a baby.

@blakeshelton @gwenstefani Wow! Just saw this about your miracle baby while waiting on a prescription at Walgreens! Not just naming the dogs? Hahaha??? pic.twitter.com/6aMa2iXatB

Poking fun at these rumors, Shelton introduced Stefani by saying, “You guys are very lucky…she actually gave birth to twins yesterday. And she’s here tonight to sing with me.”

The song they chose to sing was their 2016 duet “Go Ahead and Break My Heart.” The couple co-wrote the song for Shelton’s album If I’m Honest. Even though it wasn’t released as a single, it still managed to climb as high as the 13th spot on the Hot Country Songs chart and the 70th spot on the Billboard Hot 100.

Shelton’s fans always get a kick out of watching him perform the song with Stefani live, since the two place their love on full display whenever they sing it. In their Oklahoma performance, they two both displayed beaming smiles throughout most of the song, making it clear they were having a wonderful time together.

At the end of the song, Shelton reached for Stefani and pulled her close. Then, much to the crowd’s delight, the two shared a sweet smooch before Stefani walked off of the stage.

Ever the jokester, Shelton started wiping at his face, implying that Stefani had smeared her signature red lipstick all over him. He even held out his hand to a band member, seeming to ask him if he could see the lipstick he just wiped off of his face. How cute!

You can check out Shelton and Stefani’s duet in the clip below. We love watching them sing together!