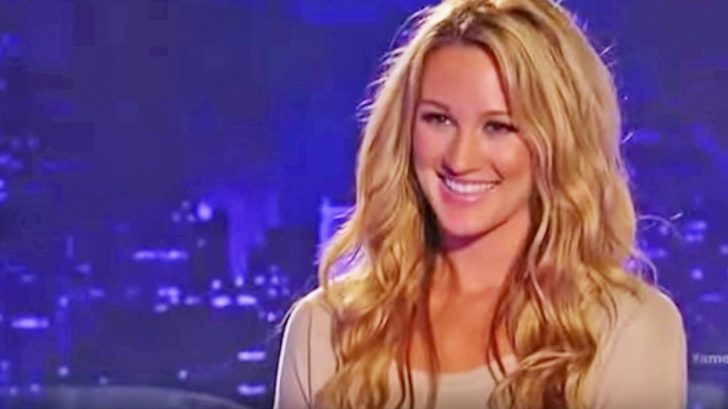 While most people know her as the wife to one of the biggest names in country music, few know Brittany Aldean once pursued a singing career herself. The bubbly soon-to-be mom of two children has quite the golden pipes. While she’s posted precious videos of her singing to their first born, Memphis, her very first audition showcases her true talent.

Prior to meeting husband Jason Aldean, Brittany auditioned for American Idol.  Young Brittany sang the Joss Stone song, “Spoiled.” It wasn’t long into her audition that the beautiful blonde won over judges Steven Tyler and Randy Jackson with her voice. At her audition, the male judges were immediately taken by her outward appearance, however, they were absolutely blown away when she began to sing.

“I think that’s good, I like it,” said Tyler following her audition to the tune of Joss Stone’s “Spoiled.” “You’re on pitch and you’re good-looking.”

While she didn’t earn a yes from judge Jennifer Lopez, Brittany’s audition was enough to earn her the golden ticket to Hollywood.

Flash forward to today, and Brittany is raising her beautiful family alongside with her talented husband. The couple has one child together, Memphis and one baby girl on the way, Navy. Brittany has also become the stepmom to Aldean’s two daughters from his first marriage, Kendyl, and Keeley.

It was such an honor making the invitations and signs for Brittany and Jason Aldean’s baby shower! Their theme was so…

Posted by The Artisan Abode on Wednesday, November 7, 2018

You can watch Brittany’s Idol audition below.