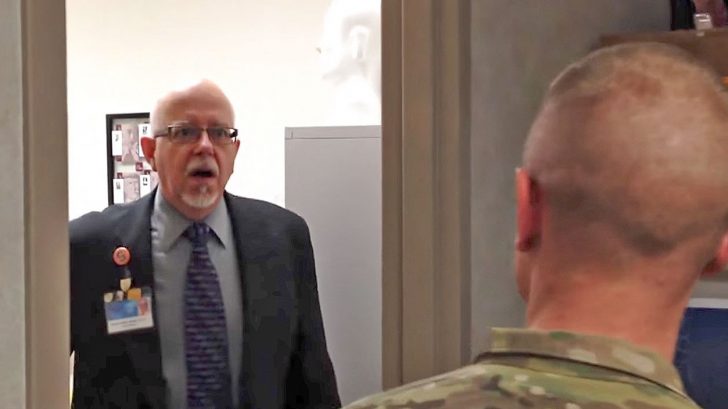 One soldier pulled off the surprise of a lifetime when he decided to give his dad a memory that he will never forget! Mason had been deployed for over a year as an MP, thrilling his friends with the news that he would be returning home from deployment a few weeks earlier than expected.

"This reunion helped a lot of us gain some prospective on incidents that occurred during our deployment. These guys are my heroes and this organization allowed some of us they may have never been financially able to drive or fly to reunite, to come together 12 years later. “ pic.twitter.com/YoZl5hnCiD

Mason decided to keep the good news from his family, including his father, eager to surprise him in an incredibly epic way!

Showing up at his dad’s office, he crept around the corner of the building while asking a nearby receptionist to keep her voice low. “Oh my God,” she whispered upon seeing Mason, covering her face to hide her emotion. Asking what his father was up to, she responded, “He’s with the reps. Go ahead,” before encouraging him to knock on the office door.

Mason knocked loudly, as his father’s muffled voice was heard behind the door inquiring as to who had been disrupting the meeting. After a few seconds of no answer to the door, Mason eagerly knocked further, with a much louder intent. His father appeared to respond to the noise, utterly dumbfounded to see his son before him. “Mason!” he cried, breaking down into tears as they embraced for a tight hug.

“I can’t believe you,” his father uttered. Coworkers began to clear the room, chuckling, “This meeting is over. There are more important things going on in this room.” The video revealed that Mason pulled the same surprise on his mother and sister just moments after this great reunion with his father.

Watch this heart-melting moment between Mason and his dad below.