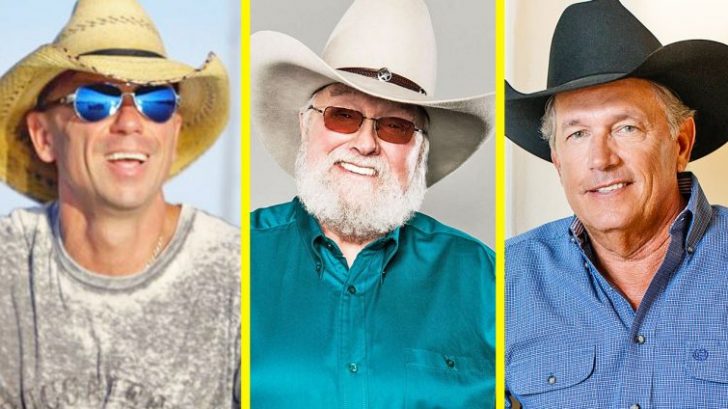 You Wouldn’t Recognize Many Of These Singers…

While country music fashion has changed over the years, there’s one accessory that has stood the test of time…the hat. For decades, the cowboy hat has been the staple of many country artists’ wardrobes. So much in fact, that they are hardly seen without one!

More modern artists have adopted the ball cap as their hat of choice. Others stay true to tradition, sporting a cowboy hat whenever they step outside. Either way, they can never seem to part with their signature headgear.

But believe it or not, these artists have ditched their hats on a few rare occasions. Ever wonder what your favorite country artists look like without their hats? You’re about to learn!

Click the button below to get started. You may be surprised just how different these artists look without their hats!

It isn’t often that you see Alan Jackson without his signature white cowboy hat. But when you do, it’s usually because he’s showing a sign of respect during a tribute performance.

Such was the case when this photo was taken in 2013. Jackson was performing at George Jones‘ funeral at the Grand Ole Opry, and removed his hat to hold it over his heart as he sang.

Brantley Gilbert can almost never be seen without a black baseball cap on his head. Although he had it with him while walking the red carpet for the ACM Awards one year, he ended up taking it off and carried it in his hands.

He looks like a completely different person without his hat on, don’t you think?

Even people who don’t know much about Clint Black can recognize him in his signature black cowboy hat. Because of that, we never imagined that we’d actually find a photo of him without his hat on!

It turns out that Black has gone without his hat on a few random occasions, like he did for this super romantic photo shoot with his wife, Lisa Hartman Black. He looks good!

A hatless Garth Brooks is a rare sight indeed! Brooks almost always has some sort of headgear on, whether it’s a cowboy hat or baseball cap.

Surprisingly, there have been a handful of times that Brooks has left the house without a hat. Now that’s not something that you see every day!

With the exception of his early mullet days, country music fans have always known Toby Keith to be a hat-wearing man. Much like Brooks, if Keith isn’t wearing a cowboy hat of some sort then you can bet that he’s got a baseball hat on his head.

Keith is so committed to his hats, that he even wore them when he starred in the film Broken Bridges. But he ditched his hat for this scene, and we finally got the chance to him with no hat and no mullet!

One of the only country gals known for wearing a hat, Terri Clark‘s cowgirl hat is a signature part of her look. Clark never seems to wear the same hat twice, and has a variety of colors and styles in her collection.

That’s what makes it all the more surprising to see Clark on the rare occasion that she doesn’t wear a hat. It seems like she’ll go without one for photo shoots sometimes, but that’s about it!

From cowboy hats, to beachy straw hats, to baseball caps, Kenny Chesney and hats just go hand in hand. So you can bet it’s quite a shock when he’s spotted without something on top of his head!

Interestingly, Chesney made the decision to go without his hat for his music video for “Come Over.” Shortly after its release, the gasps of country music fans could be heard around the world. Well, maybe not, but the sight of Chesney without his hat was a big surprise!

Chris Stapleton is known for wearing his tan, feather-covered hat. In fact, that hat is almost as recognizable as Stapleton’s voice!

But Stapleton has gone without his trusty hat a time or two, like he did during the 2016 Grammy Awards. He took home some awards that night, and we took home this priceless photo of him without his hat!

Since Charlie Daniels has a larger-than-life personality, he needs a hat to match. That’s why you almost never catch Daniels without his giant white cowboy hat.

Like many of the other singers on this list, it seems like Daniels only leaves his hat at home for special ceremonies and other occasions. That’s what he did in this picture from 2016, when he attended the 2016 Media Research Center Gala to accept the William F. Buckley Jr. Award for Media Excellence.

As a certified cowboy, George Strait has earned the right to don a cowboy hat whenever he wants. And that he does, at least 99.9% of the time.

But there have been a few times that Strait has made many a country gal’s heart skip a beat when he’s stepped out with no cowboy hat in tow. Just look at that picture above and you’ll know what we mean!

There you have it folks…that’s what some of your favorite country singers look like without their hats. Which artist do you think looks the most different, or which one were you the most surprised to see? We’d love to hear your thoughts in the comments!