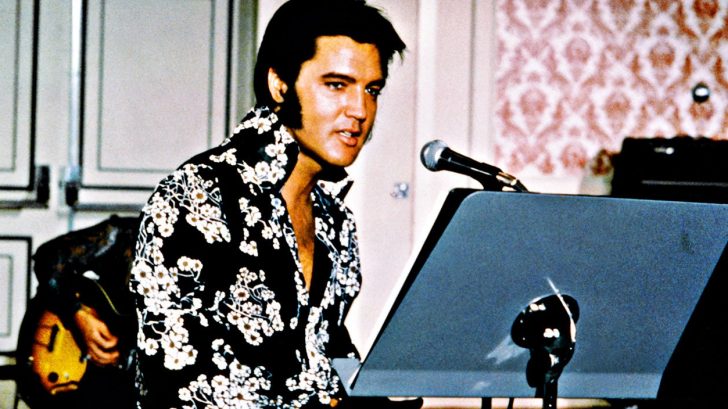 A phenomenal country music hit and iconic song across multiple genres, this recording was part of a rare set of songs that were taken at Elvis Presley‘s Graceland mansion in Memphis.

Elvis and Glen Campbell in the Jungle Room at Graceland. His black velvet suit. The cigarillo. The whole thing. pic.twitter.com/RDXtoNWKEp

In the last year of his life, Presley released his bluesy and soulful rendition of George Jones‘ famous “She Thinks I Still Care” as the B-side to his single, “Moody Blue.” Both tracks were recorded and cut in his home, taken as a series of recordings from his now-famous Jungle Room.

There's only one place in the world where you can experience the Jungle Room – and that's at #Elvis Presley's #Graceland in #Memphis. Start planning your rock 'n' roll pilgrimage: https://t.co/Ko8CGwujan pic.twitter.com/tTDvUOTBcW

The song speaks of a man addressing his belief that a former lover still thinks he cares about her following their split. He touches on different things he has done that would indicate to her he does care, but denies the fact, saying “But if she’s happy thinking I still need her / Then let that silly notion bring her cheer.”

Elvis' "Way Down in the Jungle Room" is available on vinyl, CD, or digital download: https://t.co/CBN3nX1Y3T pic.twitter.com/qS25R6F1ZC

It was during these sessions that Presley displayed his still-endless talent and proved many critics wrong when they claimed he was no longer musically creative. Crafted just months before his tragic passing, this home recording of The King is an eerie reminder of how far-reaching his musical legacy is, even 40 years after his death.

Check out Elvis Presley’s heartbreaking home recording of “She Thinks I Still Care” below and let us know what you think in the comments.