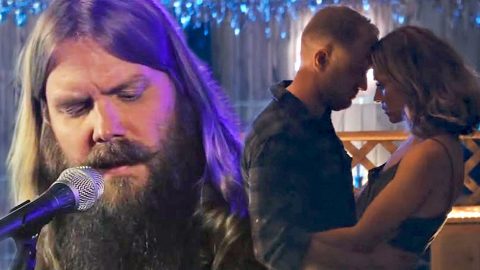 Following his performance during the 2015 CMA Awards, Chris Stapleton became an instant country superstar. His debut album, Traveller, was showered with numerous awards, including some Grammys.

After all of that hype, Stapleton used his newfound fame and influence to help promote awareness for a good cause. In February 2016, Stapleton released his official music video for his song, “Fire Away,” and it proved to have the potential to change lives.

#CMAawards50 has announced another winner @ChrisStapleton will take home the Music Video Of The Year trophy for "Fire Away," #Jaxcountry pic.twitter.com/i0xvPL9pDC

How The Video Captures The Song

Co-written by Stapleton and Danny Green, “Fire Away” was included as the second track on Traveller. The song’s lyrics tell the story of a toxic relationship, with the narrator singing:

“Pick up your sticks and your stones, and pretend I’m a shelter for heartaches that don’t have a home.” In response to the pain and suffering the narrator experiences in the relationship, he tells his lover “Fire away. Take your best shot, show me what you got.“

The song’s lyrics take on an emotional new meaning in the music video, which follows a couple through multiple stages in life, including courtship, marriage, and buying their first house. But prior to all of that, we see the man walk into a bar alone, which sets up the premise that his love story doesn’t have a happy ending.

the fire away music video still makes me cry every time I see it. why do u do this to me @ChrisStapleton

As the video progresses, it is revealed that the wife struggles with depression, and even tries to kill herself. Thankfully, her husband rescues her in time. However, she tries again, and that time her husband is unable to save her life.

Stapleton only makes a brief appearance in the video as the bartender, but his vocals playing over the events in the video stand powerfully on their own.

The video and the song help bring awareness to issues concerning suicide and depression. Stapleton even mentions The Campaign to Change Direction at the end of the video, which is an organization that pledges “to change the culture in America about mental health, mental illness, and wellness.”

Stapleton expresses his support for the organization through the message in his emotional music video for “Fire Away,” which you can watch below. Be prepared to dry a few tears off your face once you finish.