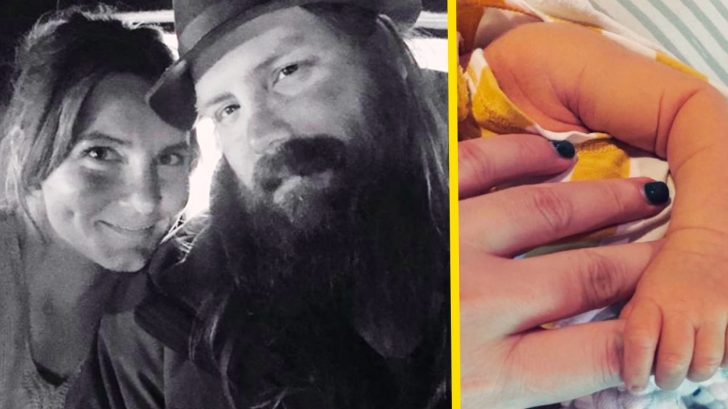 And baby makes seven! The Stapleton family’s ever-growing brood just got a little bit bigger, because their fifth child is finally here!

Back in November, Chris Stapleton told his fans during a show that his wife, Morgane, was expecting. The news was quite the surprise, since Morgane had just given birth to twin boys in April.

Before the baby boys were born, the Stapleton family was a party of four. Chris and Morgane also have a son and a daughter, and they’ve tried their best to keep them out of the spotlight.

Over the years, Chris and Morgane refrained from sharing any photos of their children. They also kept their names secret for the longest time.

But Chris finally shared the names of two of their kids during an acceptance speech at the CMA Awards in November. Although he didn’t name the twins, he did reveal that their eldest children are named Waylon and Ada.

While we know Waylon and Ada’s names, we haven’t seen them that often. A search back through Morgane’s Instagram reveals she has posted pictures of the two before, but they never show their faces.

So you can imagine the surprise fans were in for when, after the twins were born, Morgane almost immediately shared a photo of the two of them on her Instagram. The now-famous photo shows Morgane snuggling her baby boys to her chest while she looks down at them, completely in love.

As it came time for Baby #5 to come into the world, curious fans wondered if Morgane would once again be willing to share a photo of their new addition. They finally got their answer when Baby Stapleton was born just in time for Mother’s Day!

Taking to Instagram, Morgane revealed she had recently given birth to the newest member of their family. She shared a photo showing nothing more than the baby’s arm and hand, writing, “The most perfect Mother’s day…I wish all you Mama’s the happiest of days today!”

The most perfect Mother’s day…I wish all you Mama’s the happiest of days today! ?

The precious photo shows the baby holding on to Morgane’s finger while all snuggled up in a white and yellow striped outfit.

If you were hoping to find out if Baby Stapleton is a boy or a girl, you’re out of luck. Not only did Morgane refrain from sharing the new baby’s name, but she held off on announcing if their new addition is a little boy or baby girl.

And you won’t find any clues in the baby’s clothes or blankets either, since there is no bright pink or blue to be seen!

Still, we have to appreciate the fact that Morgane at least was willing to share a photo of her new little one. It’s such a rare thing for her to do something like this!

Congratulations to Chris, Morgane, Waylon, Ada, and the twins on their new addition! We’re sure they are over the moon with happiness right now.