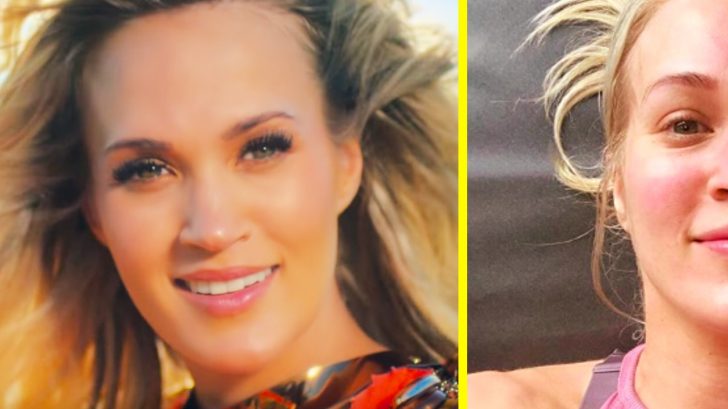 Carrie Underwood is a self-professed lover of makeup. So when the 36-year-old country superstar experienced serious insomnia during the third trimester of her second pregnancy, it only made sense that she chose to entertain herself by looking for new makeup products.

Only one time, Carrie’s nighttime shopping got a bit out of hand, and she ended up ordering over $600 worth of makeup. She didn’t even remember her insomnia-fueled shopping spree come morning, and was shocked to discover just how much makeup she had ordered.

She maintained a good sense of humor about the whole ordeal, and even tweeted about her oopsie, including a hashtag “#SeemedLikeAGoodIdeaAtTheTime.”

Worst part about insomnia = waking up this morning to see what I bought online while I was up. I just realized I spent over $600 on make up. ?‍♀️ #SeemedLikeAGoodIdeaAtTheTime #HelpMe #TakeAwayMyShoppingApps#ButThereWasASale

Since Carrie loves makeup so much, it’s a rare thing to see her without it. Sometimes she goes for a more toned-down look than the ones she sports on stage or at awards shows. But photos of a completely makeup-free Carrie are more of a rarity, though they do exist.

Perhaps Carrie’s most famous makeup-free moment came after she gave birth to her second son, Jacob, in January.

The photo Carrie shared of herself showed her completely makeup-free, with a sweet smile on her face as she snuggled with her baby boy (that photo appears second in the slideshow below).

Jacob Bryan Fisher entered the world in the wee hours of the morning on Monday…his mom, dad and big brother couldn’t be happier for God to trust them with taking care of this little miracle! Our hearts are full, our eyes are tired and our lives are forever changed. Life is good…

Carrie Opens Up About Insecurities

Fans praised Carrie for sharing such a “raw” and “real” photo of herself following Jacob’s birth. Since then, Carrie has continued to open up and show her vulnerable side to her fans, most recently when she talked about the difficulties she’s experienced while trying to “bounce back” to her pre-pregnancy state of fitness.

If there’s anything Carrie loves more than makeup, its exercise. But things have been a bit more challenging for her than they were before she had Jacob. She opened up about her struggles in an inspiring post to social media.

“I make a promise to myself to start appreciating what my body CAN do and stop focusing on what it can’t,” she wrote. “I promise to stop analyzing every angle and every curve and every pound and every meal.”

I’m going to be honest, “bouncing back” after having Jacob has been much more difficult than after I had Isaiah and I’ve been pretty hard on myself lately. I go into the gym and I can’t run as fast or as far. I can’t lift as much weight or do as many reps as I could a year ago. I just want to feel like myself again…for my body to feel the way that I know it can. As I was working out today, I realized that for the past 11(ish) months, my body has not belonged to me. It was a perfect home for Jacob. And even now it belongs to him every time he drinks his milk. As I prepare for red carpets and for life on tour, right now I make a promise to myself to start appreciating what my body CAN do and stop focusing on what it can’t. I promise to stop analyzing every angle and every curve and every pound and every meal. I’m going to keep staying the path because it is a journey and as long as I’m always working towards my goals, one day I’ll reach them. I’m going to take it day by day, smile at the girl in the mirror, and work out because I love this body and all it has done and will continue to do! #bodyafterbaby #fitmom #healthy #staythepath @caliabycarrie

Being Real & Sharing Love With Fans

Carrie earned a wealth of support following that post, which is perhaps why she chose to open up even more in another post over a week later. This time, the photo Carrie shared is a close-up selfie, and shows her completely makeup-free.

On top of sharing a rare photo of herself without makeup, Carrie had some encouraging words to share with her fans. Those words were inspired by the phrase on the front of her “favorite new” workout top, which reads “ I’m doing this for me.”

“Sending out lots of weekend [love] to you all!” she wrote. “May we all get lots of stuff done and make a little time for ourselves in there, too!”

When your face matches your shirt = you had a good workout! Unless your shirt is blue…then maybe you should be concerned! ? (sorry, total mom joke) I took these pics after my gym sesh yesterday (today I’m cleaning this mess of a house, which I totally consider to be my Saturday workout). This is one of my favorite new outfits…I especially love the top because this is basically my motto these days! ? Anyway, just wanted to share! Sending out lots of weekend ❤️ to you all! May we all get lots of stuff done and make a little time for ourselves in there, too!

She is so inspiring! Those are some words that we could all stand to hear from time to time.

Carrie is all about spreading the love, which is why it makes perfect sense that her current single is a song titled “Love Wins.” The stunning song has an equally stunning music video to match, which you can watch below.

Makeup or no makeup, Carrie is beautiful inside and out!