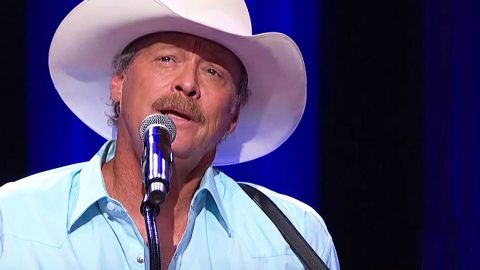 Alan Writes From The Heart

Country music legend Alan Jackson has recorded no shortage of striking ballads notorious for stirring up our emotions.

From tunes such “Sissy’s Song” to “Where We You (When The World Stopped Turning),” Jackson has spun real events and emotions into musical masterpieces.

Such is the case with the heart-tugging ballad “I’d Love You All Over Again”.

An Ode Of Love

Out of Jackson’s many love songs, you are probably most familiar with his hit tune, “Remember When.” Written by Jackson, the song has him reflecting on his life and love with his wife, Denise.

The two were high school sweethearts, and have been through a number of trials since they first got together. But they have emerged as a strong, united force through it all, and have raised three beautiful daughters in the process.

But “Remember When” isn’t the only one of Jackson’s love songs that captures how he feels for his wife.

In what is perhaps one of the most fitting wedding songs to be created, Jackson sings of undying love in a little song titled “I’d Love You All Over Again.”

He also says that, if presented with the opportunity to marry his true love again, he wouldn’t think twice.

Merry Christmas from our house to yours. And special thanks to our friends at @balsamhill for sending us this beautiful 15’ Christmas Tree! We look forward to making many family memories around our new tree. Wishing all of you a VERY MERRY CHRISTMAS and HAPPY NEW YEAR!

Although it was obviously a massive hit with the ladies, the song was also a soaring success on the Billboard charts, skyrocketing to the coveted top spot in 1991!

Be sure to listen to the intensely emotional song below! Would you classify it as one of your favorites?