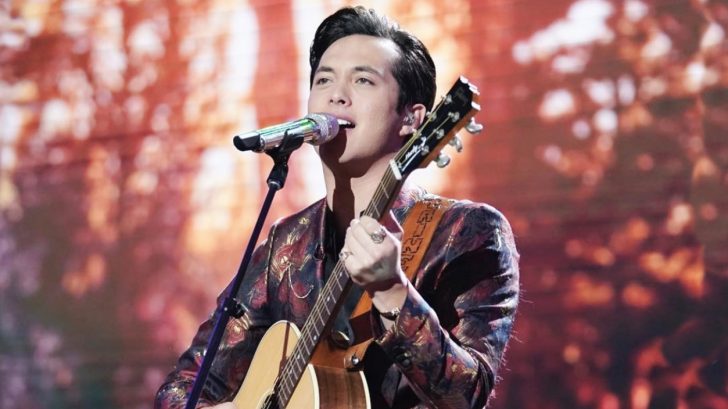 We first met Laine Hardy in 2018 when he was a shy 17-year-old. He auditioned for the first season of the ABC reboot of American Idol with a cover of the song ‘Hurricane” by the Band of Heathens.

He impressed judges Lionel Ritchie, Katy Perry, and Luke Bryan so much that Bryan said, “I think if you ain’t careful, you might win American Idol.”

Although the judges loved him, they felt he lacked confidence and sent him home before the Top 50 to work on becoming more sure of himself.

When the second season of Idol began, Hardy had no intention of auditioning, even though he did show up. He came to play guitar for his friend Ashton Gill’s audition. Perry, Richie, and Bryan begged him to sing a song for him because they could already sense his confidence.

He ended up earning himself a golden ticket to Hollywood Week and he’s been a frontrunner ever since.

The Top 8 were revealed during Sunday night’s (April 21) episode after a night full of Disney-inspired performances and Hardy was the first person to be named into the elite group. He performed the beloved Robin Hood song “Oo-De-Lally,” which was originally sung by country legend Roger Miller.

After his performance, Bryan reminded Hardy what he told him in his very first audition, “You better be careful, you might win American Idol.”

Bryan never said exactly when Hardy would win the show, but it’s looking like this year, he has a really good chance at doing just that!

We have gotten to know Hardy over the past year or so on stage, but we realized we really don’t know that much about him, other than that he has an incredible voice!

So here are five facts that you should know about Laine Hardy!

1. His Favorite Singer Is Elvis Presley

In a 2018 article published by The Advocate, Hardy revealed that The King of Rock and Roll was his favorite singer of all time.

“Elvis, he’s at the top … he inspired me to start playing music in the beginning,” he said.

He channeled his idol during the Top14 show with a cover of the legend’s hit song “That’s All Right.” He even added a little but of hip shaking and lip quiver!

2. His Music Journey Began When He Was 7

According to The Advocate, Hardy first picked up a guitar at the ripe-old age of seven. He took guitar lessons from a music shop owner near his hometown of Livingston, Louisiana until he was 13.

Although his guitar playing began at a young age, singing didn’t come to him until later. In fact, he didn’t even sing in public until he was 15!

“I started singing by myself. Then I sang for mom, and she liked it. And then I sang for some of my friends,” he told The Advocate.

3. He Considers Himself A Multi-Genre Artist

Throughout this season, he has performed songs by Elvis Presley, Bruno Mars, Sam Cooke, The Band, The Beatles, The Black Crowes, The Band of Heathens, and Roger Miller, clearly showcasing his multi-genre talent.

4. He Is An Avid Outdoorsman

During his very first audition in 2018, Bryan was testing Hardy’s  “country cred” by asking him about alligator hunting. Hardy coyly admitted he had hunted gator before, but didn’t reveal his true passion for it.

And be “it,” we mean hunting in general.

Before Idol, he was part of a band with his cousins called The Band Hardy – where he wasn’t even the lead singer – and the band didn’t play any shows during hunting season so Hardy could partake in his favorite past time. He loves hunting deer, squirrel, and turkey, as well as fishing!

Thank you Mr. Dago & Mr. Ritchie for taking me fishing way way down here in Louisiana! & Hunter Terrebonne for showing me & @trentthibodauxofficial a good time! Also had some quality time with my dad Barry Hardy

5. His Mom Inspired Him To Audition For ‘American Idol’

Hardy’s mom, Cindy Lou, is his biggest fan. If you look at her Instagram page, it’s all photos and videos of him, and she clearly knows talent when she sees it.

While we are pretty sure his friend Ashton got him back this second season, but it was his mom who inspired him to initially try out for the 2018 season.

Hardy wasn’t sure at first when his mom brought it up, but he eventually listened to his mother’s encouragement and auditioned in New Orleans.

Like Luke Bryan said, if Hardy isn’t careful, he might just win American Idol – and he did! Watch his crowning moment below.