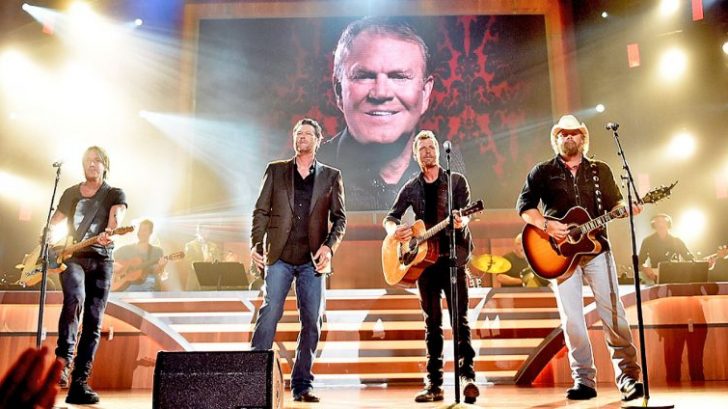 There is only one song that comes to mind when thinking of paying tribute to the legendary Glen Campbell: “Rhinestone Cowboy.” It quickly became his signature song, gave him his nickname, and won him the ACM award for Single of the Year, numerous American Music Awards, and a few Grammy nominations.

Since his solo debut in the 1960s, Campbell has been nominated for ten ACM awards, winning nine between the years 1967-1998. He is considered a country legend because of his 50+ years in show business, more than 70 albums, 45 million records sold, and thanks to his role in True Grit, he is also award-winning actor.

Glen Campbell, John Wayne and Kim Darby are huntin' for the same guy across some mighty vistas in the original True Grit at 1.15pm. pic.twitter.com/jfMEZXJtiF

Because of his decorated career, the Academy of Country Music awarded him with the Career Achievement Award at the 2016 ACM Honors. Paying tribute to a legend like Campbell takes a lot of gusto, which is why the ACM needed not one, not two, but four country greats to perform “Rhinestone Cowboy.” Blake Shelton, Toby Keith, Dierks Bentley, and Keith Urban joined forces for a memorable rendition of Campbell’s signature song.

Their performance will have you tapping your toes and singing along. We know they made Campbell proud and we hope he was able to watch. In the years before this performance, Campbell’s health had declined as a result from Alzheimer’s Disease. He passed away on August 8, 2017.

What makes this performance even more memorable is Campbell’s youngest daughter, Ashley, is singing backup and playing banjo. Watch the performance below.