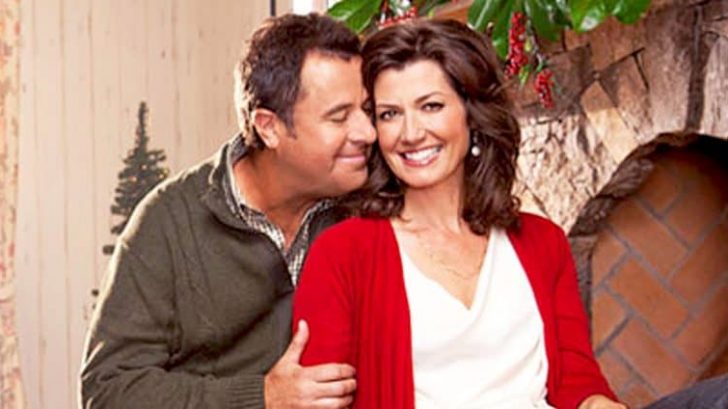 Vince & Amy Were Meant To Be

From the moment they met, Vince Gill and Amy Grant had undeniable chemistry. The two were both married to other singers at the time of their first meeting in 1993, but fate would bring them together again.

Gill and his first wife ended up divorcing, and Grant and her first husband divorced shortly afterwards. After maintaining a strong friendship since their first meeting, Gill and Grant’s relationship eventually turned romantic shortly after Grant finalized her divorce.

The couple married on March 10, 2000, and welcomed their daughter Corrina on March 12, 2001. All of these years after their wedding, and Gill and Grant’s love is still as strong as ever.

Ever want to know more about how these two lovebirds came to be together? Look below to see how their love has developed over the years.

It all started in 1993, after Gill invited Grant to perform during his televised Christmas special. The two had never met before, but since Grant was well-known as a Christian singer, it seems that Gill thought she’d be a good fit for the show.

The two met for the first time during the special. Gill recalled the moment during an interview with Primetime in 2002. On a dare, Gill went up to Grant and asked her to dance. As they danced, Gill couldn’t stop thinking about how beautiful she was.

“I started dancing with her, and those pretty big eyes,” he said. “I started to sing and the words were just nowhere to be found. And the people were laughing at me.”

Since Gill and Grant were both married at the time of their first meeting, their relationship became a powerful friendship. That friendship gave the two of them the chance to collaborate in 1994, when they recorded their first duet together.

Called “House of Love,” the song was released as the second single off of Grant’s album of the same name.  It peaked at the fifth spot on the Adult Contemporary chart, and reached the Top 40 on the Billboard Hot 100.

While recording “House of Love,” Gill and Grant’s friendship became even stronger than it was before. As a result of the duet, they remained close throughout the 1990s.

“I felt like I knew him instantly,” Grant said during the Primetime interview. “I was so moved by him as a human being that I went up behind him and just hugged him as hard as I could while he was singing. I just said, ‘I just needed to hug you all night.’”

Once Gill and Grant were both divorced from their respective spouses, the two decided to see if they could make it work as a couple. They started dating in late 1999, and obviously it worked out, because they were married just a few months later.

The two said “I do” on March 10, 2000. They were married near Nashville, during a ceremony that featured bagpipes and the bride and groom in bare feet.

Later, during an interview on Oprah’s Where Are They Now, Grant talked about how she still feels so lucky to be married to the love of her life. “I am thrilled to be married to Vince Gill,” she said.

After marrying, Gill and Grant blended their families to become one. Gill had one daughter from his previous marriage, while Grant had three. The two eventually had a daughter of their own, Corrina.

They moved into a house in Nashville, and have managed to keep the fire burning after all of these years. Their love for one another is just as clear as it was on the day of their wedding, as you can see in the above video.

In the video, Gill proclaims his everlasting love for his beautiful wife before moving into a sweet love song. Now that’s romantic!

Congratulations to this country couple on their many years of marriage!