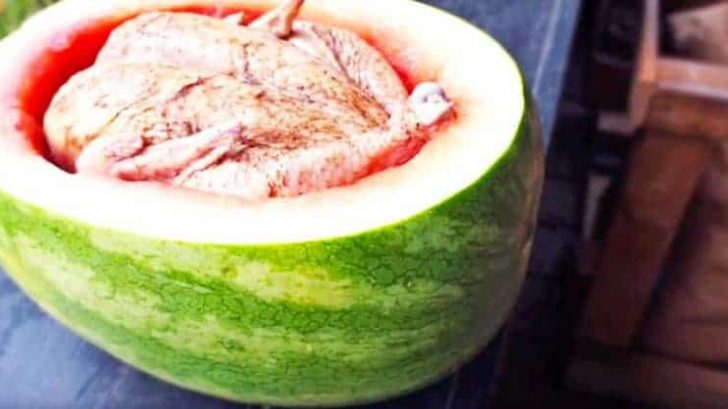 Most Unique Chicken Recipe Ever

Say “farewell” to your roasting pans ladies and gents, because they are now a thing of the past. There’s a hip new way to cook an entire chicken, and it doesn’t even involve a dish.

You ask…but what in the world would I cook that chicken in? Well, a watermelon of course!

Hear us out. While the idea certainly sounds a bit wacky, it’s actually wacky enough to work. How do we know? Because someone has attempted it before, and has video footage to prove how it panned out.

Learn How To DIY

YouTuber Emmymade is always up for preparing unusual dishes she can share with her followers. After reading an April Fools’ Day recipe in The New York Times for a whole chicken cooked in a watermelon, Emmymade decided to see if the recipe would actually work.

One thing you need to keep in mind is that you need a pretty big watermelon to pull this recipe off. Either that, or buy a smaller chicken to compensate.

There’s no denying the fact that this recipe is more of a summer dish, since watermelons are in season at that time, and larger ones are more plentiful. Still, this is definitely a good recipe to keep in your back pocket so you can wow all of your friends and family at your first summer cookout this year.

It’s actually easier to cook an entire chicken in a watermelon than you would think. All Emmymade did was cut the top off of the melon, then she dug out just enough space to make room for the chicken. After that, she seasoned the chicken with a few simple ingredients.

The seasonings Emmymade tested, along with the taste of the melon, results in a chicken that is equal parts sweet and savory. All you have to do is put the chicken-encased watermelon in the oven for five hours…and tada!

How Does It Taste?

Once the chicken is done, it is as tender as can be. The watermelon serves as the perfect serving dish, or you can take the chicken out too if you’d prefer. For added flavor, Emmymade removed the chicken from the watermelon and then crafted a gravy from its juice.

Want to give this recipe a try? Just follow Emmymade’s instructions in the video below.

Who ever would have thought that cooking a chicken in a watermelon would actually work? What’s next…frying burgers in grapefruits? Now we know that the possibilities are endless!