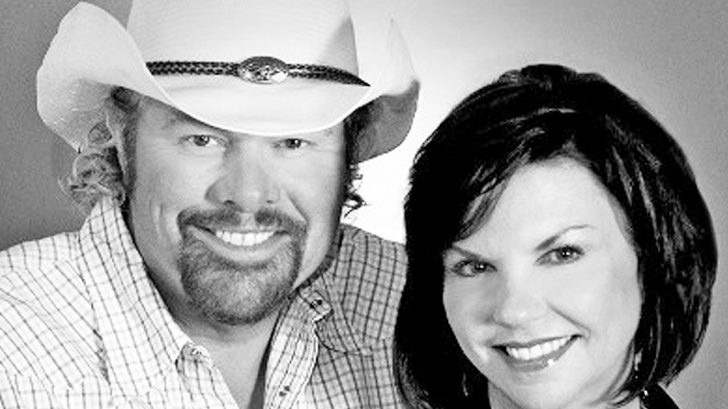 Toby Keith was only 22 years old on March 24, 1984 when he said “I do” to a girl named Tricia Lucus. The two first met each other in a nightclub, and dated for three years before they decided to tie the knot.

Even though they were both young when they married, Toby knew he wanted to spend his life with Tricia, who took his real last name, Covel. Three kids and 34 years later, the two share a love that should serve as an inspiration to us all.

To honor this incredible country couple, we’ve gathered up a handful of their sweetest pictures to share with you. Go below to take a photographic look at their love story.

After their marriage, Toby adopted Tricia’s daughter from a previous relationship, Shelley. The couple went on to have two children of their own, a daughter named Krystal, who has made a name for herself in country music like her famous father, and a son, Stelen.

Speaking of their children, the above photo shows Toby and Tricia with their daughter, Krystal. From a young age, Krystal started to show an interest in following in her father’s footsteps.

Krystal made her big stage debut in 2004 when she performed the song “Mockingbird” with her father at the CMA Awards. But she put her music career on hold per Toby’s request, because he wanted her to go to college first.

After graduating from college, Krystal finally signed a record deal with Show Dog-Universal. Her first single, “Daddy Dance With Me” was a chart hit. We’re sure Toby and Tricia are so proud of her!

Although Tricia doesn’t make many public appearances, she often tags along with Toby to attend special events. That’s exactly what she did in 2011, when she joined him on the red carpet at the Michael Jordan Celebrity Invitational Red Carpet.

Tricia has always stood by Toby, even when other people tried to discourage her from doing so. Early on in their marriage, Toby worked in the oil fields to help support his family. But when the fields dried up, he decided to pursue a career in country music. Despite the risky nature of trying to make it in the music business, Tricia supported her husband 100%.

“Dozens of people told Tricia, ‘You need to go tell your old man to get a real job,’” Toby told Nash Country Weekly “It took a strong-hearted and loving woman to say, ‘He’s good enough at music that I’ve got to let him try. And it’ll be a great shot for both of us if he can make it work.’”

As we now know, Toby made it work, and has sold a total of more than 40 million albums worldwide. He received one of the greatest honors of his career in 2015, when he was officially inducted into the Songwriters Hall of Fame…with Tricia right by his side.

Despite his rise to fame and becoming one of country music’s biggest superstars, Toby has always found the time to keep the romance alive in his marriage.

“He has his moments of charm,” Tricia told People. “It is nice to get a bouquet of flowers, but I’ve told him, ‘Save the money. Roses die in five to seven days. Buy me an outfit or take me to dinner.’”

Talking About A Cause Close To Their Hearts

Knowing what it’s like to have to struggle to make ends meet, Toby and Tricia now try to give back as much as they can. Their biggest philanthropic endeavor is the OK Kids Korral, a facility created to provide a home away from home for families who have children receiving cancer treatments.

To honor their philanthropic work, the ASTEC presented Toby and Tricia with the Door-Opener Award in 2014. The two spoke in a video interview about how much it means to them to be able to give back at such a capacity.

“It’s been rewarding to us to be able to give back, because we were those that were struggling and looking for opportunities and trying to make our way when we were young,” Tricia said with tears in her eyes. “We see that daily.”

Despite all of the odds that were against them at first, Toby and Tricia’s marriage has been able to stand the test of time. Together, they are making a difference in the lives of others with each passing day. Now that’s true love!